Happy 100 to me!!  I realized last night that I had reached the magic number of 100 sold flips!!  That doesn’t count clocks, boxes, lanterns, etc, only furniture.  And I also counted pairs as one, so technically I’ve sold over 100 items since I started selling three years ago.

The scene of the event.

What was the luck 100th piece? 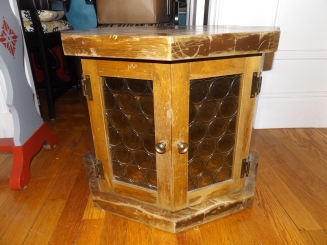 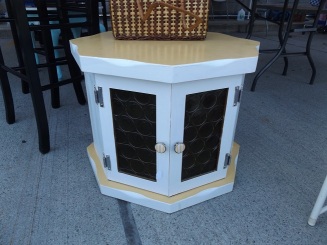 What made it even better was that it was the one piece I REALLY wanted to sell yesterday.  It’s a big, ol’ heavy, awkward-to-carry  1970’s end table.  I REALLY didn’t want to have to take it home and carry it up the stairs only to have to take it back to market next week. I priced it to sell, and sell it did!  PHEW!

It’s hard to see but the glass doors are dark yellow which is why I went for the yellow color.  How many of you grew up with similar pieces of furniture?  I know I did!  My mother bought a set which include a coffee table and two side tables–one of them in the shape of a hexagon.  No glass doors though, wood.  Ugh.

I found it on the side of the road and it had three feet, one was missing.  I tried to see if I could find another one to make the four, but no such luck.  So I opted to just remove the feet all together. 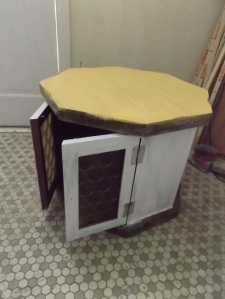 A work in progress.

I’m glad it found a good home. The girl who bought it was excited and luckily her roommate’s boyfriend was there and was given the job to carry it back to the apartment.  He was a big guy so I’m sure he no problems.

She also bought this little cutie. 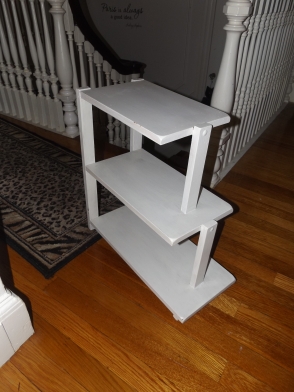 It didn’t turn out exactly the way I wanted but that’s okay.  She liked it and it has a home.

I’ll post more later and share with you the story of the horrible people who came into my booth.  Stay tuned!